The Cheltenham Group was founded in 1920 with the aim of bringing together local professional artists and to hold joint exhibitions of their work.
The group seeks to promote an interest in and understanding of contemporary visual arts through a regular programme of exhibitions and educational activities in the area.

The group has never drawn up a formal manifesto. Indeed, it is characteristic of the exhibitions that works are widely varied in style, approach and technique. The membership includes abstract and representational painters, illustrators, printmakers, textile artists and sculptors.

The group is keen to attract members of all ages working in both contemporary as well as traditional media with the aim of expanding the range of work and representing current art directions.

For details on applying to join the Cheltenham Group of Artists, please go to the
MEMBERSHIP APPLICATION page.

A GLIMPSE INTO THE HISTORY OF THE GROUP

The CGA was founded in 1920. The earliest photograph of members that has currently been found is one from the Cheltenham Chronicle and Gloucestershire Graphic dated 20 October 1928 as shown below : 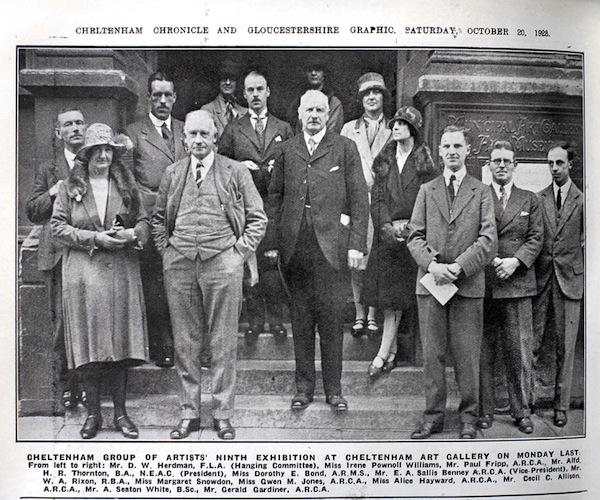 From time to time Helen Brown, the Collections Manager at the Cheltenham Art Gallery & Museum, has written articles for the Gloucestershire Echo which have featured artists which belonged to the Cheltenham Group of Artists. These articles included one on Alfred Thornton and one on Irene Pownoll Williams both of whom are shown in the above photograph of members in 1928. The articles are summarised below :

Alfred Thornton (shown 4th from the left in the above photograph) was a leading member of the CGA and in 1928 was its President and a member of the New English Art Club which was more adventurous in its approach than the more traditional Royal Academy (Ref 1). He was most interested in Impressionism and Post Impressionism and had met Gauguin in in Brittany in 1890. He studied at the Slade School aged 25.

Below is an oil sketch by Thornton of Steel's Garage (which was at the back of the Royal Hotel at 105 High Street Cheltenham where the Beechwood Arcade is now). This sketch, with its bold colour and simple composition, was voted joint third in 2005 in Cheltenham's public vote of favourite paintings in the Museum. The Cheltenham Art Gallery & Museum has a number of his works. 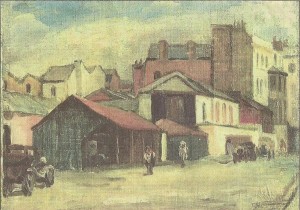 Irene Pownoll Williams (shown 2nd from the left in the above photograph of 1928 members) trained at the Slade School and taught at the Cheltenham School of Art (Ref 2 ). She was a leading member of the Cheltenham Group of Artists, a regular exhibitor and a memorial section was devoted to her in the CGA 1971 exhibition.

Pownoll Williams worked a lot in tempera and was a member of the Society of Tempera Painters. Shown below is her painting of St Kenelm depicting the story of the saint linked to Winchcombe. The painting was given to the Cheltenham Art Gallery & Museum in 1931 by another significant member of the Cheltenham Group of Artists W A Rixon (also shown in the 1928 members photograph above). 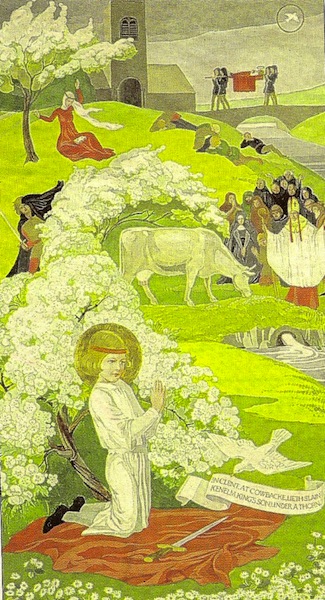